In uncertain times, discover new ways to plan for the future​

How can you shape the future?  What steps can you take today that will move you towards the future you want and away from a negative tomorrow? 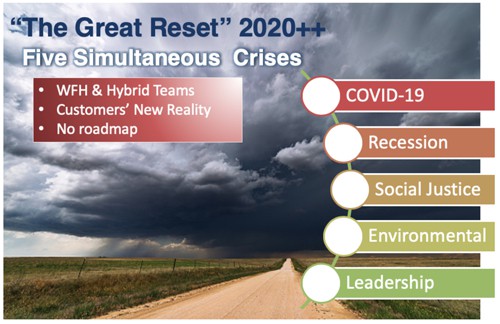 Guest speaker futurist Brian David Johnson will discuss how to think like a futurist.  He’ll explore the methods for business leaders to not only imagine their future but the pragmatic steps that can be taken to get there

MGL CEO Craig Martin will be hosting an engaging conversation with Johnson during this 90-minute webinar.

This program is right for:

A former Fortune 500 VP, Craig Martin is a master certified coach, team coach and consultant who equips and inspires leaders and teams to become “future fit” as they move through the “Great Reset” and into a new business reality.

leading in a new world.

Register for the webinar and receive our free guide: “The FutureFit Guide to Planning Like a Futurist” following the conclusion of the webinar.
Register
Register now

Speaker Bio:
The future is Brian David Johnson’s business. As a futurist he works with organizations to develop an actionable 10 to 15-year vision and what it will feel like to live in the future.

As an applied futurist Johnson has worked with governments, trade organizations, start-ups and multinational corporations to not only help envision their future but specify the steps needed to get there.  Johnson is currently the futurist in residence at Arizona State University’s Center for Science and the Imagination, a professor in the School for the Future of Innovation in Society and the Director of the ASU Threatcasting Lab.  He is also a Futurist and Fellow at Frost and Sullivan.

Johnson speaks and writes extensively in ongoing columns for IEEE Computer Magazine and Successful Farming where he is the “Farm Futurist”.  He has contributed articles to publications like The Wall Street Journal, Slate, and  Wired Magazine.  Johnson holds over 40 patents and is the best-selling author of both science fiction and fact books (WaR: Wizards and Robots, 21st Century Robot and Science Fiction Prototyping).

He was appointed first futurist ever at the Intel Corporation in 2009 where he worked for over a decade helping to design over 2 billion microprocessors.  Johnson appears regularly on Bloomberg TV, PBS, FOX News, and the Discovery Channel and has been featured in Scientific American, The Technology Review, Forbes, INC, and Popular Science.

He has directed two feature films and is an illustrator and commissioned painter. In 2016 Samuel Goldwyn released “Vintage Tomorrows” a documentary based upon Johnson’s book of the same name.

His upcoming book, The Future You, launches on Amazon on January 5, 2021.